How Lead Time Was Reduced By 80%

Home
>
Case Studies
>
How Lead Time Was Reduced By 80% 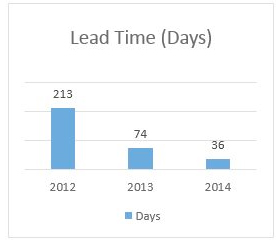 Before Lean, an Oil and Gas Engineering Firm took an average of seven months to see a project through to completion. Their project lead time was 213 days … they would agree that is a pretty gross statistic, but it was a hard reality they had to face before they could make things better.

After starting their Lean journey, they began to see immediate improvements to many of their business metrics, but their lead time improvement was perhaps one of the most drastic. Within two years, they had reduced their project lead time by over 80% and they started completing projects in about five weeks, on average.

How did they do it? They had to start by taking a look at some hard realities in their processes and figuring out ways to fix them.

Here are some examples:

It’s important to mention that all of these improvements were done with the same number of employees. The old system of pushing projects through the system led to tremendous amounts of waste. Focusing on seeing one project through to completion was much more effective than having many partially completed jobs. In the end, they did not start as quickly, but they finished substantially faster.

If you are interested in learning more, contact Red-5 to learn how this paradigm towards viewing your project work could be realized within your business too.

5S Is More Than Just A Tool

3 Misconceptions About Lean That Might Be Standing In Your…